This knot - sometimes also called the "foursome knot"”, There is a reason why it is also called simple - it is very easy to tie and even among new tie novelties it is immediately impressive. Four-in-hand is definitely multifunctional: in combination with various materials, it fits almost any style of the collar.

Four-in-hand is still the "initiation node."”, which every boy learns from his father. He is also found under different names, such as "hair knot” or the "old German knot."” – depending on the country, who happens to be the discoverer of this simple bond. Additional advantage: the tying technique protects the tie!

In the footsteps of the coachmen?

Looks like it, że Four-in-hand – as well as some other nodes – it was made of a sailing knot. There are different theories about the origin of the names "Four-in-hand."” or "a knot in four”. When he showed up, Four-horse carriages were popular, whose coachmen allegedly fastened the stopped carriage with such a knot. Other sources indicate, that the coachmen wore identically tied scarves around their necks or that these carriages could only be driven by men in identical ties. At the same time in London there was a club under the same name, whose regular customers wore the then fashionable long ties with the same knot, and thanks to them it gained popularity.

Many Four-in-hand supporters try to tie the tie as precisely as possible, meanwhile, asymmetry is characteristic for this type of knot! It is thanks to her that it can serve not only as an initiating node, but it is also suitable for everyone, who want to demonstrate their individuality and charm. If it is important to you, that the node is symmetrical, you will probably be happier with the simple windsor knot. 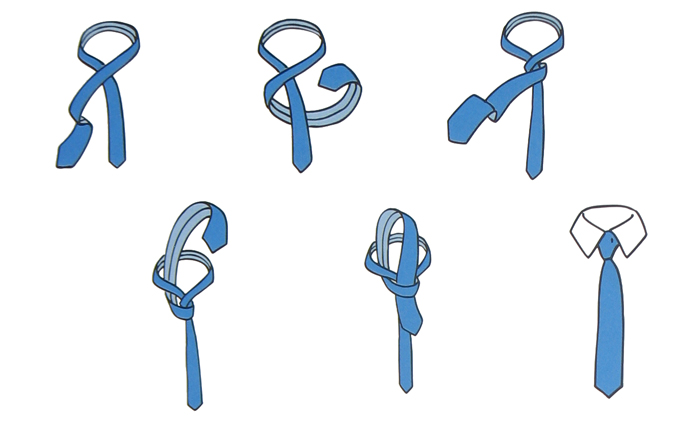